Skip to content
Filter
ON SALE! 25% OFF
Add to Wishlist

SALE ON THIS ITEM FINISH IN

Made by Aqeeq Stone with 925 sterling silver frame. Back side is open to touch your skin everytime. On stone written “Mohammad Rasool Allah” in Arabic which means “Mohammad is the messenger of Allah”.

Made by Aqeeq Stone with 925 sterling silver frame. Back side is open to touch your skin everytime. On stone written “Mohammad Rasool Allah” in Arabic which means “Mohammad is the messenger of Allah”.

What is Aqeeq Stone

These are available in several colours: white, milky white, yellow, green, black, red, grey, liver colour and many others. The best are the liver colour from Yemen, which are difficult to obtain and expensive. It has great religious significance and for a Shia it is a must.

A Hadith from Janabe Salman Farsi r.a. states that “the last Prophet requested Imam Ali to wear a ring on the right so that he may be listed among the Muqarrabeen (those near to Allah). The Imam asked the Prophet as to who the Muqarrabeen were, to which the Prophet replied Janabe Jibreel and Janabe Mikaiel. Then the Imam inquired as to which stone should he wear. The Prophet replied Aqiq (cornelian), as this red stone had accepted the Oneness of Allah, the Prophethood of the last Prophet, and the vicegerency of Ali ibne Abi Talib, and the heavens for Ali’s friends and Shias”.

It is Sunnate Muakkedah (highly commendable) for men and women to wear ring rings on the right hand.

Imam Ali (as) has said: Wear aqeeq on your rings, you will be blessed and will be saved from afflictions.

Ma`adh has narrated on the authority of Imam Ali (as) saying: The one who wears an aqeeq ring, God grants him (literally: seals for him) the peace (al-amn) and faith.

The 5th Imam(IMAM MUSA KAZIM A.S.) stated that if a person possesses a ring set in Aqiq and turns it towards his palm and then looks at it, and recites Sura Qadr (Chapter 97), then Allah keeps him protected the whole day, from trouble whereever they are descended from heaven or earth and, he will be protected until the evening by Allah, and Allah’s friend who will guide him.

The 6th Imam had stated that the last Prophet Settled to wear his ring on the first finger and has prohibited wearing of a ring on the middle finger. Also according to the 6th Imam, a ring should be worn at the very end of the finger, where it joins with the palm.

Hazrat Imam Jaffer as-Sadiq (a.s.) has said that a namaz with Aqeeq is 40 times better than one without it. It is also great thawaab to use tasbeeh of aqeeq as said by Hazrat Imam Musa e Kazim (a.s.)

Another tradition states that praying two rakats Namaz (prayers) while wearing an Aqiq ring is better than praying a thousand(1000) rakats without it.

The 6th Imam stated that Aqiq brings safety while traveling.

One should recite the following Dua, while wearing a ring. ‘O Allah, let the signs of faith be the cause of my recognition. Let my end be worthwhile and let there be good for me even in the world to come. It is well-known that Thou are All Mighty, All Wise and All Generous.

The Shias will identified by these symbols, having the ring on the right hand, praying 5 times a day at the right timings, giving Zakat, distributing among his religious brothers his belongings, ordering good actions and keeping people away from evil.

The 9th Imam(IMAM MUHAMMAD TAQI A.S.) stated that “Aqiq takes away the poverty and dissolves differences in one’s heart”.

From a tradition from Bashir Dahhan . . . if a musalman wears a ring of even one of the three aqias, he will derive its benefits, his sustencance (rizq) will be increased, and he will be protected from dangers, disasters, misfortunes and accidents. It will also be a protection for him in frightening and terrifying cirumstances, like facing the oppression of a tyrant.

The benefit of Aqeeq is that it creates joy in the heart, is good for eyesight and it helps illuminate sadness and anger. It is also revered in other religious and has been in use from the time of Hazrat Adam (a.s.). It absorbs the rays of the sun and passes these onto the body and is good for health. Black Aqeeq protects children from envious eyes.

All orders ships via DHL, UPS or TNT Express up to your location. Shipping is free of charge without any minimum purchase. Delivery takes 1 to 3 days to any worldwide location and fully trackable. 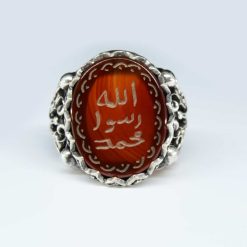 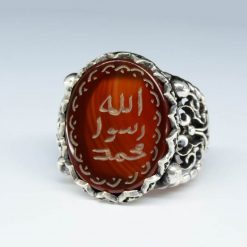 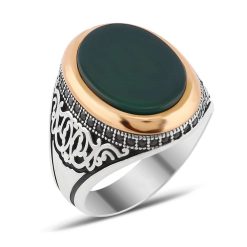 ON SALE! 5% OFF
Add to Wishlist
+
Quick View 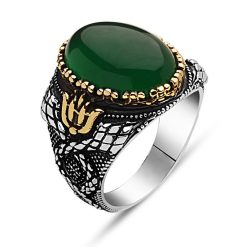 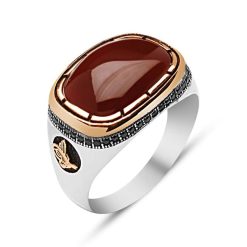 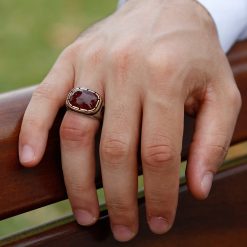 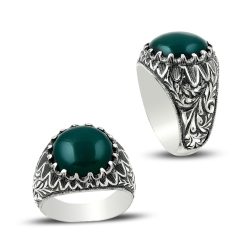